They don’t look too spooky but these are supposed to be evil pumpkins with bats for facial features! 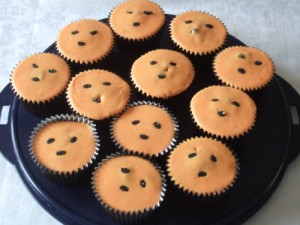 evil pumpkins with bats for eyes

A fruity cupcake made from grated pumpkin, sultanas and chpped pecans for a bit of crunch, the frosting is a cram cheese and orange frosting that was supposed to be stiff enough to pipe, but I guess the orange juice was too much liquid, if I make these again I will have to experiment with getting the strangth of orange flavour but with less liquid. Still, I think they’re pretty cute in the very creepy way! 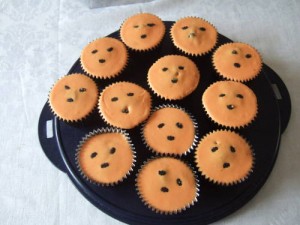 sssh! These might be a healthy cupcake containing pumpkin, sultanas and orange don't ruin their evil reps!