Okay, so I know it’s still a bit early to be thinking about Spring when it’s still cold and dark out there most of the time, but this pattern is in the March 2011 issue of Sew Hip magazine, so don’t blame me!
This is called the Dingle Dangle Rabbit and because he reiminds me of easter and Spring, I made him in some remnant yellow lineny and gingham fabric I had in my sewing basket. 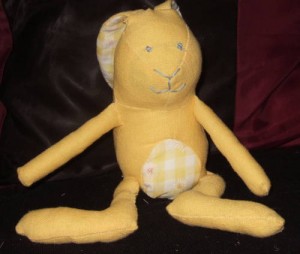 This is my first try at making a stuffed toy with my sewing, I can’t say it was a resounding success. Whether it was because I struggled with the tiny .5cm seam allowances or the fact that the yellow linen fabric (I think its a linen blend, it was a remnant and I can’t remember) frayed something rotton so that my seam allowances weren’t enough, I ended up with gaps in the seams, it also seemed to tear terribly easily. This does seem to have ended up for the reject bin. 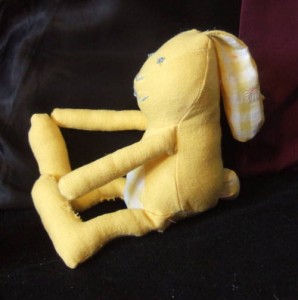 he has floppy ears and a little tail

At least he didn’t cost me anything but a Saturday afternoon to make. I think I will try making him again, because he’s not far off being ok, but I think I would just use quilting cottons which are much easier to work with.