I have been a bit slow putting these pictures up but I have been away from my computer for the break :D. Here are the pictures of 2011’s Christmas cakes and a rather terrible photo of some other Christmas treats I made for gifts. 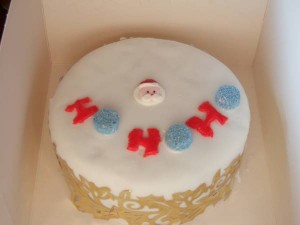 This tiny Christmas Cake was made for my OH’s nan. The design idea came from the Christmas issue of Good Food Magazine, I didn’t have a ‘H’ cutter, in fact I don’t have any letters so I had to make do with a kitchen knife to cut out the letters, they look a bit creepy to me, with their jagged edges and their bright redness. Maybe I should invest in a sugarcraft set and get myself some smaller more precise tools for cutting shapes rather than my unwieldy kitchen knife. Still, I quite like it and it’s the taste of the cake that matters most right? 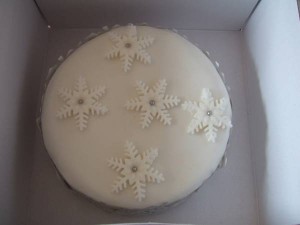 This snowflake Christmas cake was made for my nan, the snowflakes might be a bit on the large side and the balance a little off, but I still think it’s pretty. 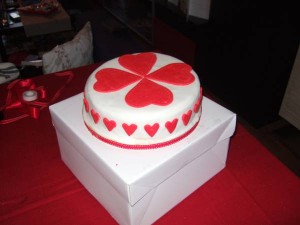 yea! I get to try this one!

The final Christmas cake was for us. I took it round to my OH’s parents and we enjoyed it on Christmas Day and possibly there may still be a tiny bit left in the box. Having some of the red sugarpaste left, I decided to go for a Scandinavian vibe with the decoration of this one, I almost managed to convince myself that I could get away with pretending my moose cutter could be mistaken for a reindeer, but in the end I decided to go with more hearts for the top. I think this one looks sweet.

I had trouble buying my cakeboards the right size this year and left it too late to order online, the bottoms of these cakes are a bit wonky, next year I shall be far more organised.

A small sample of the other goodies I made for gifts

The above unclear photo is a sample of a mass of dark chocolate covered goodies. We have some Danish Honey Hearts, recipe taken from the Observer Christmas food supplement. I have never tried these before and I am still unconvinced as to whether they came out right. I was wary of giving them as gifts, but after eating 4 to try and decide whether I should or not, it seemed that I might really be trying to keep them all to myself. We also have some Florentines in the picture, I should have perhaps have taken the photos before they were packaged and in my kitchen where the light is better, live and learn. The last of the selection is made up by a dark chocolate brittle containing brazil nuts, macadamia nuts, white chocolate chunks and chunks of fudge. The recipe was taken from 1001 cupcakes, cookies and tempting treats. All in all I would say I was quite pleased with these offerings although I am on the hunt for a dark chocolate with less than 70% cocoa solids as to my mind I think this may be too bitter to suit everyone’s tastes, but I don’t want to start using milk chocolate as I find this more difficult to work with, so I will do some research into this.

I think that’s it for Christmas related projects, I hope to have some sewing and knitting projects for myself finished up soon to share with you.