It has been a while since I last posted but that doesn’t mean my hands have been idle, for one I’ve been working on a couple of super secret gift projects but I should be able to reveal all in another month or so, I’ve also been busy trying to crochet hundreds of motifs to make up some garlands for decorating our wedding reception hall later this year, but the main reason it’s taken so long to post about these projects is that I’ve been too wrapped up in my winter clothes as we experienced a dire April.  Anyhoo, the sun was out and it was warm yesterday so I got the OH to finally take these photos for me. 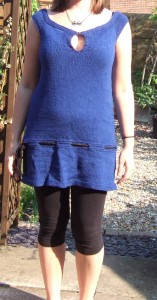 Knit in Louisa Harding’s Albero #17, a 50% Cotton 50% Lenpur-Viscose mix this involved an awful lot of stockinette stitch but I love it!  Knit seamlessly it was my favourite sort of project, no seaming the pieces at the end, which would really have gotten me down after all of that simple stockinette.  I am really pleased with this project, if I were to make it again, I think I would add some garter stitching to the edge of the sleeves, in the pictures in the book you can see it there, but the pattern makes no mention of doing this.

Next up was another knitting project, this is the Demeter top from Sensual Knits 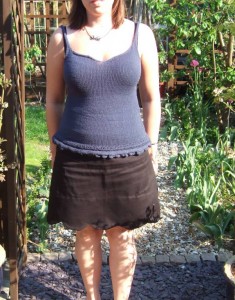 Knit in Debbie Bliss Rialto 4 ply, this was again another stockinette stitch heavy project, but it has suited my mood lately where I wanted to make some simple projects that would turn out well and be quite versatile, I have been in a back to basics mood lately.  Once again, another seamless knit, at least until the shoulder straps, it features a cute sweetheart neckline and a lace edging at the bottom that you can’t really see well in this picture.  This is another project I am really pleased with although I haven’t quite figured out how to get the edging to lie flat yet, maybe a more stern blocking is required?  I tried adding a row of crochet stitches to the bottom to add more weight, which helped, but it isn’t perfect, maybe some beads too would be a nice touch.

Now onto some sewing, continuing with my back to basics mood, I had been frustrated with sewing projects never seeming to turn out right so I wanted to go back to the beginning, being self taught and having no one around to learn or ask advice from, I was looking for patterns considered easy.  For Christmas I had received a copy of the fabulous Colette Sewing Handbook and I had been desperate to try my hand at the patterns in the book, but having been working on these special projects, I’d had no time to sew for me.  That needed to change.  So I selected the first project in the book, the Meringue skirt.  Jaycotts were also having a pattern sale and whilst browsing I came across the pattern for this top, Simplicity 1831, for ridiculously cheap and the pattern front said it was ‘sew simple’ so it fit the bill nicely.  here’s how they turned out: 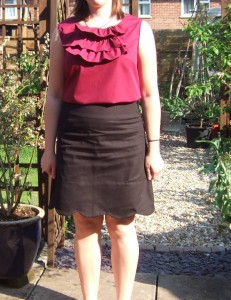 Please excuse the rumples in the skirt, I had been wearing it all day. The skirt is made from a cotton twill and is either the best fitting skirt I have ever owned and I am just not used to wearing clothes on my waist or so close, or it’s a touch too small. I can’t tell, I don’t have to lie down and breathe in to get it done up or anything, but it still feels a bit odd. I may make the next size up to compare how I feel in it. Also, when I make it again I shall hand stitch the scallop facings as it turns out my sewing machine only really has one speed, no matter how lightly your foot is on the pedal, it likes to race, so some of my scallops are a bit flat. I would also like it to be a bit longer, it turns out my desk chair is quite scratchy on the pins :S. That said, I think it is possibly the best thing I have ever sewn, french seams, bias binding on the facings edges, an invisible zipper, pretty even darts. It is a project that I needed, fairly simple and quick to put together, but the lines were simple enough that my finishing could be pretty smart too. I feel like I accomplished something pretty cool.

The top is made from a cheap polycotton in Wine (I really love the colour) it was something like £3.99 a metre and I needed less than 2. I think this turned out pretty well too, once again I went for the french seams. It was my first attempt at adding ruffles too and I think they turned out ok, although the top one seems a bit puffy but I think that has more to do with the neck facings than anything else. I wasn’t a fan of the facings really, especially at the arms. I plan to make this top again and I think I will bias bind the neck and armholes, also I will skip the button at the back (it’s just a bit annoying to do up) and I think I will put an invisible zipper at the side (I do need some opening somewhere to make it a bit easier to get on and off, especially as this fabric has no give in it at all). Still, I really needed these 2 sewing projects to restore my faith in my sewing abilities.

All in all, I am pretty pleased with this round up of projects, I’ve got some wearable items for my efforts which believe me doesn’t happen often.