Or I should probably say beautifully scented, because it is, well I mean, they are.

Having not had much time for crafting over the summer because of weddings etc, I wanted a bit of a quick and easy project that would also be stash busting as I have realised I need to seriously start using the scraps of stuff I have stuffed in a spare wardrobe.

So may I present to you some not really thought about in great detail lavender sachets! 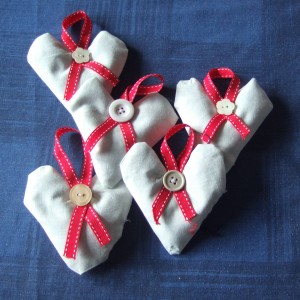 Made from some thin cotton that was once a curtain lining and filled with heavenly dried lavender, I didn’t really think through the making of these and I really should have.

Turns out I am not very good at sewing curves, even when I have drawn a stitching line all the way around. After some googling I discovered that it might be easier to sew the heart shapes if I drew them on the fabric but did not cut them out. Instead cutting round my stitching afterwards, thereby giving me more fabric to be able to hold onto for guiding round. Does this work? Or do you have any other tips?

So my heart shaped lavender sachets may be a bit boxy in places but as they are a scrappy project I’m not too worried and as they are being hung in my wardrobes and stuffed into drawers where they won’t be seen much, it won’t bother anyone else either.

The bits of ribbon and buttons also came out of my stash and were easy to stitch on by hand before I filled them with the lavender, then I just ladder stitched them closed. I do enjoy a bit of ladder stitching. 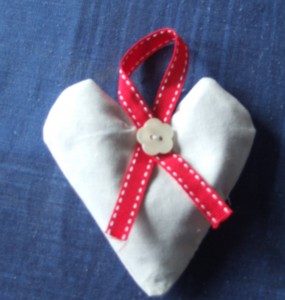 So there they are, my lavender sachets. I actually have a load more hearts already cut out to make some more, but my curve sewing doesn’t seem to be getting any better so I am considering hand stitching them all, but I don’t know. Like I said it doesn’t matter to much really as no one gets to see them. So we’ll see. They still smell goooooood 😀